Every so often in Nature, the right conditions come together producing some exciting event that supersedes the common. From these events come fantastic stories that one wants to believe, but will have a hard time doing so - until one actually witnesses the event.

Trout fishers experience this type of natural event almost every winter on the White River in north-central Arkansas. February and March mark a special time for trout fishing on the White River. Those of you who have been here before are probably aware of the shad kill we have each spring. If you have not fished the White during the shad kill you are missing one of the most exciting events in all of trout fishing!

This is when 8 to 10-pound trout are frequently caught. You'll also catch plenty in the 1 to 4-pound range, and a few in the 15 to 18-pound range are caught each year. You'll catch trout until you just plain too tired to catch any more. The weather is generally mild with day time temperatures well above freezing. Rarely will snow be on the ground. If you have a case of winter time blues and need a good excuse to get away for a few days, you can say with confidence, "Hey! I gotta go NOW! This happens only once a year!"

Sometime after the first of the year, usually by Mid-February, the shad begin to be sucked through the generators at Bull Shoals Dam and are swept down the White River for miles and miles. The White is a tailwater fishery with its origin at Bull Shoals Lake dam. Bull Shoals Lake is loaded with millions of shad. As the lake cools each winter the shad are stunned or killed by cold water. The current pulls them down the lake, through the power generators, into the White River. The amount of the shad kill varies, mostly based on how cold the weather gets. The colder the water, the bigger the kill. The longer the weather stays cold, the longer the kill lasts.

Some of the shad die. Others are wounded or stunned and flop about weakly in the river. Most float along the water surface and the trout have to rise for them.

Feeding frenzy? You Bet! The trout go nuts, lose all fear of life, and proceed to gorge themselves on the shad. Sometimes the shad kills last a week or two, sometimes they last a month or more. The amount of shad pushed through the generators will also vary. The more shad that pass through the generators, the more intense the feeding frenzy becomes. In years with larger shad kills more of the bait fish float further downstream, thereby increasing the range of the feed.

The timing of the shad kill normally is such that it starts about the time the big browns have just finished their spawn. They're lean, mean and hungry. The rainbows had a nice winter's rest (very little fishing pressure); they're in really good shape. Every trout in the upper part of the river will be gorging on these shad, which translates into some fantastic fishing.

Big trout do things they don't any other time of year, or in any other condition. It is not unusual for the big browns to porpoise out of the water coming down on top of a shad. Big trout broil the surface of the river all around fishermen. Several large trout will all pursue the lure on your line as you retrieve toward the boat, a fish already in play on the hook. It is truly amazing to watch what happens.You can imagine what the fishing action is like.

Whether you are thinking "big", or just want a good "mess" of fish for dinner, the shad run is one of the best times you can fish this river. And all methods, be it fly, artificial, and bait, are very productive.

If you are a fly fisher bring your 5 or 6 weight rod, white wooly buggers, streamers, white marabou jigs and flies (Blo flies are my  favorites), and use #6 tippets. If you prefer to chunk artificials, bring a supply of white marabou jigs in various sizes from 1/16 to  1/4, both white head and chrome dome, Rattlin' Rouges, Krocodile spoons, white or chrome in-line spinner baits, rattle traps, etc.,  are all very good baits. If you are a bait fisher, the obvious choice is a shad. There is a pretty good chance that you will be fishing  from a boat as they will probably be running a few generators for at least part of each day, so make your plans accordingly if you  are not using a guide. 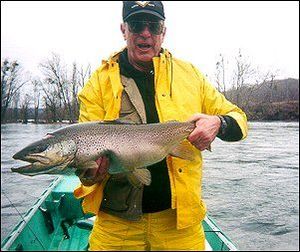